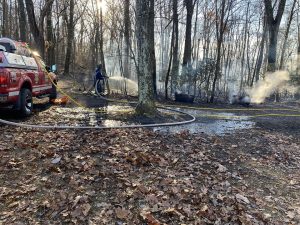 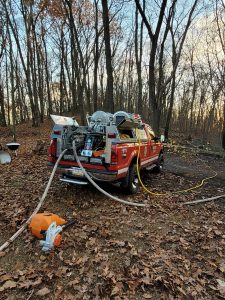 Nov 9 – Brush units from Earl, Boyertown and Eastern Berks Fire were sent  to Henry Ct in Earl at 1436 hours for a brush fire. Asst 19 arrived on location and reported a working fire running along Powerline Rd.

He requested Berks County Communications to dispatch three alarms for apparatus and personnel. a Special request was made for additional ATVs. As the fire continued to spread, it began to threaten nearby structures.

Responding department were sent to additional sites on Stetler Ct and Laurel Rd to prevent spread to these exposures. Ten dead trees were also involved and needed to be cut down. PA’s DCNR was on scene and fire personnel worked with DCNR sawyers to cut up these trees once they were felled.

Rescue 97 with a crew of 5 standing by at Pennsburg, while they operate on a Dwelling Fire in Red Hill Boro. ... See MoreSee Less

Rescue was called to the scene to assist with overhaul and clean up.