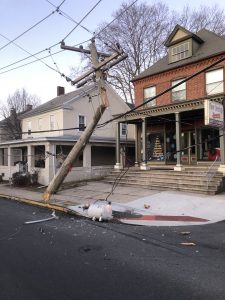 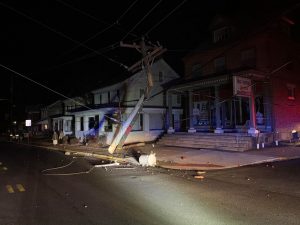 Eastern Berks Fire was dispatched shortly after 0600 hours on December 20 for pole and wires down on Main St at Church St in Bally. Responders found that a trash truck had snapped the pole and brought down wires and a transformer. Most of Bally was without power for 3 1/2 hours, when it was partially restored.

In order to clear the lines and replace the pole, Rt 100 was shut down and traffic diverted along Second St, Pine St and Seventh St most of the day.

A HUGE thank you to the many volunteer  fire police from area departments who responded to control traffic until MetEd could arrange for paid personnel to take over.

A shout out also to Berks Mont Towing for the use of their portable arrow board.

In a voice mail to area residents Met Ed reported….

“Hello this is a message from Met-Ed to our customers in Bally. The interruption to your electric service this morning was called by a garbage truck hitting and breaking one of our poles near the intersection of Main and Church Street.
Our crews were able to isolate the accident scene and restore service to the majority of our customers affected at approximately 9:30 AM.
Customers along South Church, South 5th, and Walnut Street are scheduled to have service restored later this afternoon between 4:00 PM and 6:00 PM. after repairs are completed.
We apologize for any inconvenience the outage may have cost. “