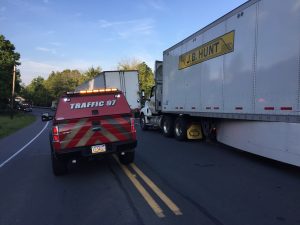 Eastern Berks Fire and Gilbertsville Medics were dispatched on Friday August 21 at 0641 hours to an MVA with injuries and possible fire in the 900 block of Rt 100 Washington Twp.
Deputy 97 arrived with a head on crash involving two vehicles, but negative fire.  Medic 369 was added as well as Fire Police from Co’s 95 and Montco 67. 97 personnel handled pt care until the arrival of EMS than mitigated fluids.
Thanks to Fire Police from 95 and Montco 67 for assisting.
EBFD units on location: Attack 97, Rescue 97, Engine 97 and Traffic 97.