Boyertown, Eastern Berks and Earl fire departments, along with Boyertown medics were dispatched at 1326 hours on Monday May 17 for a dwelling fire in the 1600 block of Weisstown Rd Colebrookdale Twp.

Eastern Berks Regional Police arrived and reported fire through the roof.
Engine 95 arrived with Engine 97 right behind them, and crews from both engines went into service with multiple lines, quickly attacking the fire.
Chief 95 struck a 2nd alarm for additional personnel. Deputy 97 was Operations officer.
Tanker 97-1 and Tanker 97 provided water to the two Engines along with other tankers from mutual aid companies. Tankers were filled by an engine from Earl at a hydrant near the Walmart.
Co 97 returned to station around 1700 hrs.
EBFD units on scene: Engine 97, Rescue 97, Tanker 97, Tanker 97-1 and Utility 97. 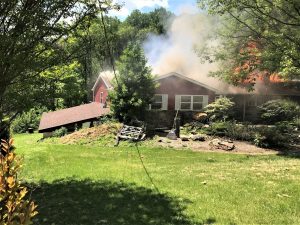 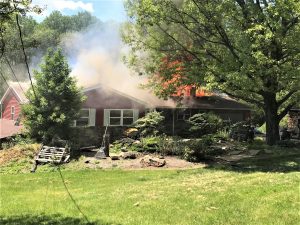