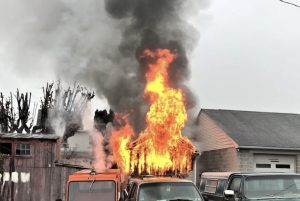 Photo from Boyertown Fire and Rescue

On January 1, 2022, fire apparatus from Boyertown, Eastern Berks, and Gilbertsville were dispatched at 1116 hours for a structure fire on BrickYard Lane in Colebrookdale.

Deputy 95 reported a working fire in a workshop, with exposure to two other buildings.

EBFD personnel from the Engine and Attack assisted with fire suppression, Rescue 97’s crew set up RIT, and Tanker 97 supplied water to Engine 95.

Crews went into service with 3 lines and knocked the bulk of the fire quickly. All exposures were checked thoroughly.

Crews awesome job keeping the bulk of the fire to the main fire building, although there was some slight extension to one exposure.