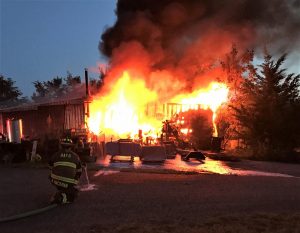 Saturday Sept 13 at 1925 hours, Boyertown, Eastern berks and Earl were dispatched for the report of a barn fire on Unger Lane in Colebrookdale Twp. Initial report stated smoke and flames showing.

Asst 95 arrived with a working fire involving a box truck and another trailer extending into another building. Engine 95 laid 1200 feet of 5 inch supply line and started attack. Engine 97 took the 5 inch at the street and established the dump site with tanks from Earl and Eastern Berks to supply Engine 95.
Engine 97-1 was instructed by command to come back the driveway and assist. The crew from Engine 97-1 went into service with an 1 3/4 inch as well as a dry line to Ladder 95.
Tankers 97 and 97-1 dumped their water into the porta-pond and proceeded to Reading Ave and Rowell Lane where Earl had established a fill site at a hydrant behind Walmart.
The fire was quickly knocked down and remained on scene for several hours overhauling then assisted packing the 1200ft of 5in on Engine 95.
Traffic 97 controlled the intersection of Unger and Reading, while Traffic 95 took the one at Unger and Weisstown.
EBFD units on location, Engine 97, Engine 97-1, Tanker 97, Tanker 97-1 and Traffic 97. 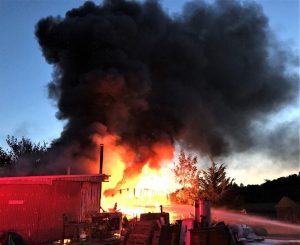 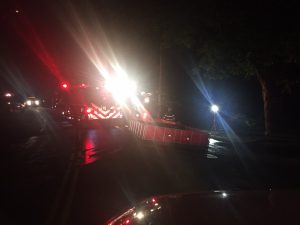 11/23/20
At 16:06 hours Company 97 was requested for a engine to relocate to Montgomery 67 for standby while they were on a dwelling fire in their first due area. Engine 97 stood by till being released by Chief 67. ... See MoreSee Less

11/14/2020
At 21:16 hours Company 97 along with Medic 505 was dispatched to the 900 block of RT100 for a MVA. Deputy 97 arrived and confirmed 3 vehicle accident with debris covering the highway. Fire police from 97,95 & Montco 67 shut down the roadway till the vehicles were removed and the debris was cleaned up. Thanks to all the fire police that assisted. 97 units on scene Rescue and Attack 97. ... See MoreSee Less