Earl Township Fire posted the following on their Facebook Page…
Eastern Berks was part of the initial alarm and responded with Engines 97 & 97-1, Tankers 97 and 97-1 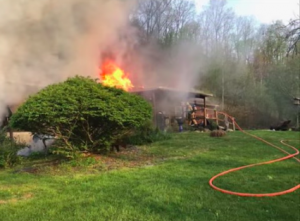 Last evening (May 3) at 6:24pm the first alarm structure fire assignment was dispatched to the 1200 Block of Powdermill Hollow Road in Earl Township.
Upon response, units were advised of reports of a fully involved house fire with possible injuries and unaccounted people. Air Medical was immediately placed on standby.
Assistant 19 arrived moments later and confirmed a 1.5 story single family, heavy fire thru the roof.
Engine 49 arrived as first in followed by Ladder 95 and Rescue Engine 6.
Engine 49 crewman went into an interior attack holding the fire to the garage and front part of the structure.
Additional manpower from surrounding companies arrived and assisted with fire surpession, water supply, fill site, and fire police.
Crews encountered tough conditions due to the location and were in service throughout the evening.
The fire was placed under control and crews began extensive overhaul.
Pennsylvania State Fire Marshal and Earl Twp Fire Marshal are working on their investigation.
Thank you to our mutual aid departments for their assistance: Boyertown Area Fire & Rescue, Eastern Berks Fire Department, Amity Fire and Rescue, Oley Fire Company, The Exeter Township Fire Department, Gilbertsville Fire & Rescue Co., Boyertown Community Ambulance Service, Oley Ambulance, and Boyertown Salvation Army.