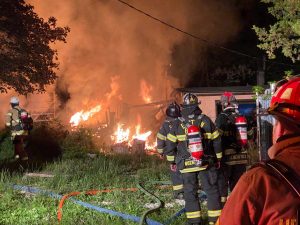 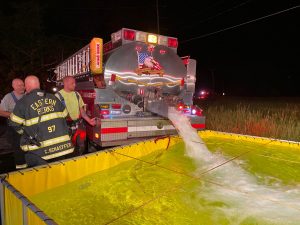 On Thursday May 20 at 0232 hours, East Greenville, Pennsburg, Eastern Berks and Hereford Fire companies were alerted by Montgomery County for a structure fire on Fruitville Road in Upper Hanover.
While enroute Montco Chief 38 requested the working fire dispatch which sent Rescue 97 for RIT.
Chief 38 arrived and confirmed a working fire, Tanker 97-1 arrived and supplied Engine 38 and Squad 65, then joined the Tanker shuttle. Tankers 97 and 97-1 dumped into the porta-pond operated by Pennsburg, and then travelled to Rt 663 and Montgomery Ave to be filled by an engine from Bucks 58.
Rescue and Engine 97’s crews stood by as RIT.
EBFD units operated almost 2 hours before being released by 38 command.
EBFD units on Scene, Rescue 97, Engine 97, Tanker 97 and Tanker 97-1.