Saturday August 20 - Barbecue day is always long, hot and tiring. Starting by 8:00am to finish preparation, lighting the pit, placing 900 half chickens on racks, and then carefully watching and turning them until they are done, THEN bagging them, all while steaming potatoes, and  getting all the other ingredients ready makes for a longgggg day.

Add to that two alarms during the day, and you get roasted firefighters!

The first call was a dispatched at1211 hours for 97 and 39 to assist EMS in District with an ALS Medical. We sent a crew in Utility 97 while the rest of us stayed with the barbecue pit.

The second call was transmitted at 1534 hours for a structure fire in Washington.Luckily all the chicken was cooked and bagged by that time, because it emptied our stations, along with apparatus from Boyertown, Bally Ambulance and Pennsburg for RIT. Chief 97 arrived and found an oil burner on fire in the basement of the home. The assignment was held to 97 and 505, with 95 and 65 returning (thank you!) A BIG thank you, as well, to Cooper Morgan's Public House at the Barto Hotel for supplying crews with icy cold bottles of water. You're the best! After securing the scene, the crews repacked the pre-connected line which had been pulled, and returned to help clean up the barbecue pit and sell 900 dinners to a hungry public. 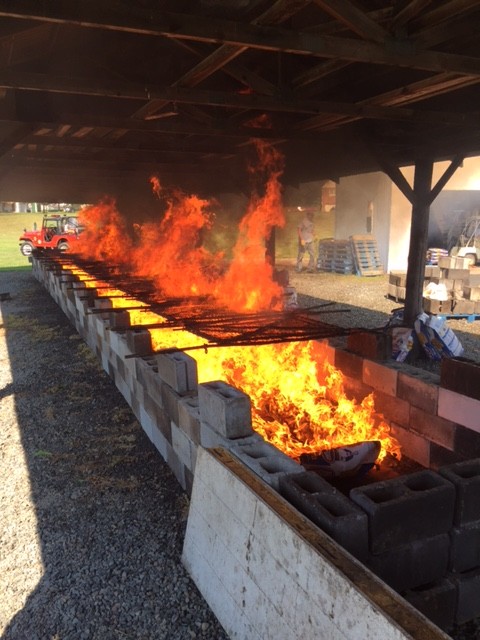