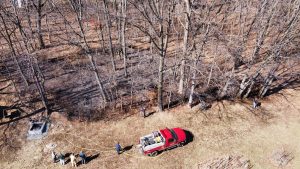 On Monday February 21st at 1258 hours, Eastern Berks Fire was dispatched for a brush fire on Lenape Rd in Washington Township.

Deputy 97 quickly arrived on scene and reported most of the fire out, but asked apparatus to report in to extinguish hot spots in the wooded area.

Arial photos of the scene provided by drone from Andy Fronheiser.

In an email earlier in the day, Chief Mike Mutter had advised EBFD personnel to be ready for brush fires since the top layers of the fields were dry from the winds over the weekend. It proved true. 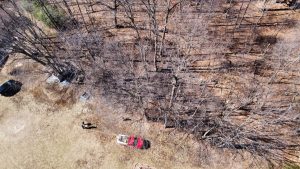