On Sunday March 8 at 1506 hours, Eastern Berks Fire along with fire apparatus from Boyertown, Hereford, and Pennsburg (RIT); and Gilbertsville Medics covering for Bally, were dispatched to Avalon Circle in Washington Twp for a possible structure fire – reported to be a wood pile on fire against residence

Eastern Berks Fire Chief Mike Mutter arrived and reported a quick thinking neighbor had seen the fire from across the backyard and ran to a neighbor of the fire house to get a hose to get the fire knocked down. An Eastern Berks firefighter living nearby and who drove directly to the scene, took the still smoldering logs and threw them away from the house. 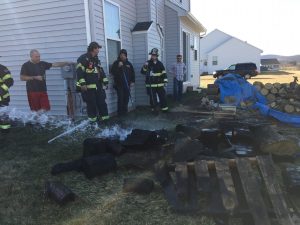 The chief held the response to Eastern Berks units. Engine 97-1 used a trash line to wet area down.