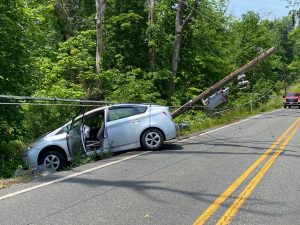 Two Accidents Eight Hours and One Half Mile Apart in Washington Township, both involving the West Branch of the Perkiomen Creek, kept Eastern Berks Fire personnel busy on Wednesday June 1st.
The first incident sent Eastern Berks Fire, Bally Medics, Fire Police from Eastern Berks and Boyertown, and PSP at 1143 hours for wires down following an MVA on Old Rt 100 near Forgedale Rd in Washington.
The car took out a pole and started over the embankment toward the creek, but stopped short. The driver was able to get out of the car, but there was a local power outage. The road closed for six hours until the car was be removed and Met-Ed could install a new pole. 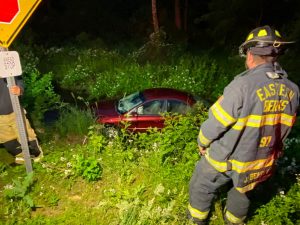 The second incident was dispatched at 2038 hours for a car rolled over into a creek on Forgedale Rd near Old Rt 100 in Washington, with unknown entrapment.
Deputy 97 arrived to confirm dispatch notes. He reported the car was now upright in the creek, but the driver was out. Fire Police shut down Forgedale Road until the vehicle could be removed.
In between these calls, company was sent for an AFA on Nuss Rd in Pike.

Rescue 97 with a crew of 5 standing by at Pennsburg, while they operate on a Dwelling Fire in Red Hill Boro. ... See MoreSee Less

Rescue was called to the scene to assist with overhaul and clean up.